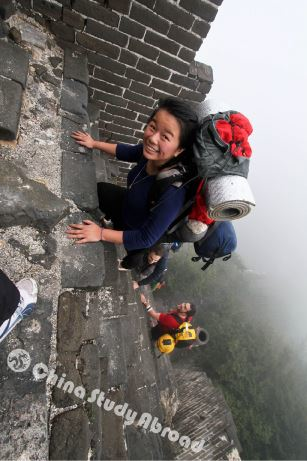 Reflections on Studying in China

I'm a third generation Malaysian Chinese who's been living in New Zealand for the past decade. The three main languages that I know are English, Malay and Mandarin - ranked specifically in that order to reflect my level of proficiency in each. I’ve been to quite a few places but the prospect of coming to China scared me even more than when I went to an ex-Soviet country for 2 months (I stuck out like a sore thumb as I could barely read the Cyrillic alphabet). Last year, I had a gap in between my jobs so I decided to bite the bullet and go to Beijing for 3 months to work on my kindergarten-level Mandarin.

I’m so infinitely glad that I did because I loved the experience so much more than I thought I would have.

Learning Mandarin has always equated to suffering, torture and hardship in my mind. Pretty much the only person I spoke Mandarin to before going to China was one of my aunts.

To my (great) surprise, I genuinely enjoyed being forced to have conversations in Mandarin and to push the limits of my vocabulary. My roommate was Korean and couldn’t speak English so we resorted to our common language – Mandarin. I look Chinese so all the receptionists and staff at our dorm would always speaks to me in Mandarin. The same also went for shopkeepers and waiters. I remember feeling so proud of myself for having a 20-minute chat with a florist when my classmate and I were buying flowers for our teachers after “graduation”. Definitely a big step up for me.

Since being back, I haven’t spoken much Mandarin and I actually kind of miss it.

2. Beijing is a bustling multi-faceted city

Now I love living in New Zealand but let’s face it, our biggest city isn’t all that big. I know many people have some gripes with Beijing due to its size, but for a 3-month stay, it’s a fascinating city. Some parts are more foreigner and tourist-friendly; some parts are little grimier and as well as ‘old school’. You’ve got modern fancy skyscrapers and then you’ve got sprawling summer palaces and gardens. I mean, 北大 (Peking University) has a freaking lake and pagoda in the middle of their campus. Cars, scooters, bikes and pedestrians all in one road (sometimes going in opposing directions).

Two of my favourite things and China is good for both. I love shopping at the markets – haggling and chatting with the shopkeepers is both entertaining and economical (sort of). None of that fixed price business; it’s the simplest form of supply and demand. How much are you willing to pay and how much are they willing to sell for?

And food, glorious street food. Late night post night out 串 (Skewered food) suppers, lazy weekend 煎饼 (thin pancake) breakfasts, ridiculously cheap 饺子 (Dumplings) for when you’re feeling like the poor student that you are, 冷面 (cold noodles) when you’re craving something spicy for dinner. Special mention for the Korean fried chicken that we ate so much of because we were living in Wudaokou.

Going on the CSA Great Wall camping trip was awesome – definitely not something I’d think of doing normally. Also really loved the acrobats show that we saw on one of the weekend sightseeing trips. I only managed to go once but I’m glad I had the chance to join in on the volunteer trip to that little orphanage.

I had a really great class and we did a lot of stuff together – climbing up the Great Wall and 香山 (Xiang mountain), going on trips to Pingyao and Tianjin, watching Beijing Opera, eating at random joints, having an epic night out on our last night together. I also hung out heaps with the other CSA 儿s – scooter-ing to the Bird’s Nest, watching them eat scorpions, riding a 3 person bicycle in Chaoyang Park, getting lost in the Old Summer Palace, baijiu nights, being artsy in 798 and of course, the countless times we were at Windows and Global.

I guess the words I want to get out there are the ever clichéd 3 words – just do it. Whether you go to China for 3 days or 3 months or 3 years, it’ll be an experience and experiences are what make you who you are.