Tianjin Province: Guide of What to do

For those that are working, visiting or studying in Beijing, Tianjin is a spectacular place to visit that is accessible from Beijing via bullet train from Beijing South Station. Tianjin is a living representation of the colonial era in China, which is fascinating to witness due to how the living history is interlaced with modern architecture. To learn more about why Tianjin is a wonderful place for visiting, consider the information below:

A Brief History of Tianjin

Tianjin was brought into the colonial era at the end of the Second Opium War. Not long after, Tianjin had Concessions from Britain and France in the city. Not long after, Tianjin also had influences from Japan, Russia, Germany, Belgium, Austria-Hungary, and Italy. What is remarkable about these historic influences is that you can still see their remains in the buildings constructed in the city today.

What to See in Tianjin

Tianjin’s Italian Town has several incredible restaurants from Italy where it is possible to get a fix of Western food for those that have been abroad for some time. Cafe Venezia is one place not to miss that has Old World Italian elegance nestled in the heart of Tianjin.

Tianjin has a wonderful waterfront and boardwalk to enjoy. Here, it is possible to take a ride on the Tianjin Eye or a nice boat tour along the river.

For those looking to relax, Dongli Lake is close to some of the most famous hot springs in China. Dongli Lake is about 40 minutes from the center of Tianjin and is quite easy to access via metro or bus.

Does Tianjin Have Special Food?

One incredible thing about Tianjin is that it does have its own food despite being so close to Beijing. For travelers looking for local Chinese food in Tianjin, it is wise to try Goubuli, Fried Dough, and Mahua, photographed below.

Goubuli is Tianjin’s take on China’s steamed dumplings. Inside are a wide variety of fillings that range from meat to vegetables.

Fried Dough is another aspect of Tianjin cuisine that can be seen in many bakeries in the city. Many of the Fried Dough dishes have a peanut sauce garnish to enjoy as well.

Tianjin is uniquely located on one of the largest import/export hubs in China. In terms of travel to South Korea, it is absolutely possible to take a ferry to Incheon to explore another wonderful country while studying, working or traveling in China. Ferries depart daily and are worth considering to extend your trip.

Tianjin is a great city to visit that is quite close to Beijing. Even though the province is quite small compared to others in China, it has a very rich colonial history that can be enjoyed through a simple walk in the city. Be sure to attempt to find evidence of the German, British, Italian, Japanese, Russian, Belgian, and Austro-Hungarian influences distributed throughout the city. For those looking to relax, take a train out to Dongli Lake to enjoy the hot springs. By doing these things, you will have a wonderful experience in one of China’s most historically interesting and culturally fascinating cities. 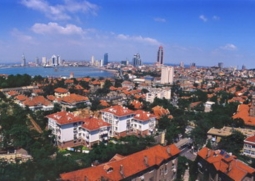