​Top 5 places to travel in China

China is a vast country with so much to offer. From bustling metropolises to mountain ranges, luscious countryside to extensive desert, China offers the opportunity for endless adventures. But for many of us, we only have a few weeks to explore, so keep reading to find out our top 5 unmissable places to travel in China.

A trip to China wouldn’t be complete without a visit to the country’s capital city. Beijing is the most populous capital in the world, with almost 22 million people calling it their home! Beijing is famed for its incredible modern developments and unique skyline, like the gravity-defying CCTV Tower, but also for its magnificent ancient sites. From the famous Tiananmen Square, the Forbidden City, and the Temple of Heaven, to the lesser known ancient Hutongs, Beijing is a history buff’s dream.

Plus, the Great Wall of China is located just a few hours outside the city. Leave the hustle and bustle behind as you drive outside the city and into the surrounding countryside. A climb along the wall will offer you spectacular views of North China’s rolling mountains. You wouldn’t want to skip this stop on a trip!

As the largest city in the world, with a population of over 24 million people and home to the world’s biggest Starbucks! Known as the New York of China, Shanghai is a city that never sleeps. One of its biggest attractions is the view of its iconic skyline from the historic waterfront promenade, The Bund - both of which are beautifully lit up at night. The financial district of Pudong makes up the unique skyline, including the Oriental Pearl Tower, the Shanghai World Financial Centre and the second tallest building in the world, the Shanghai Tower.

Despite its incredible modern advancements, Shanghai is still home to an abundance of ancient sites, including the Yu Gardens, the Former French Concession and Zhujiajiao water town. The old and the new perfectly co-exist in Shanghai, one of the most alluring aspects of the city.

Leave the metropolises behind and venture into the southwest of China to pay a visit to Chengdu. Compared to Beijing and Shanghai, Chengdu is a reasonably small city, but with a population of over 14 million, it’s still considerably larger than both New York City and London! Its smaller size gives the city an appealing laid back and relaxed vibe, which is complemented by its Sichuan teahouse culture. A short trip outside the city can take you to the Leshan Buddha, the largest stone Buddha in the world! Carved out of the red sandstone cliff-face, the statue looks out over the water where the Min and Dadu join together.

But the main attraction of Chengdu are the giant pandas at the Chengdu Research Base of Giant Panda Breeding. A native animal to China, a visit to see the giant pandas is an unmissable stop on anyone’s trip. You can even volunteer at the centre and help feed, clean and play with the pandas. Who could say no to that!

Xi’an is one of the oldest cities in China, and it has an abundance of ancient sites to show for it, including the Giant Wild Goose Pagoda, the Drum Tower and the ancient City Wall Fortifications. Xi’an has some of the most well-preserved ancient cities walls of the world, covering a total distance of 14km. One of the most unique experiences this city has to offer is cycling along the top of the wall!

As the eastern end of the ancient Silk Road trade route, Xi’an is a melting pot of different culture. The best place to experience this is with a walk through the Muslim Quarter to sample the delicious cuisines!

Xi’an is also home to the remarkable army of Terracotta Warriors, an absolute must-see for any trip to China! Over 8,000 soldiers have been unearthed so far, and incredibly, every single one has a unique facial expression and pose.

The beautiful rural areas of south China are one of the country’s biggest hidden treasures. Most travellers don’t even know that this side of China exists, and a visit to Yangshuo frequently ends up being the highlight of their trips! The town is small and bustling with the lively West Street, but Yangshuo’s most popular attraction is its magnificent karst mountains that surround the Li River.

A tranquil walk along the banks of the river can take you to the location of the image featured on the 20 RMB, where the karst mountains cast a reflection in the horseshoe bend of the river near Xingping town. You can even take a bamboo raft ride down the river and take in the beautiful landscape up close!

Inspired to visit all these wonderful places? You’re in luck! The Dragon Trip’s China tours take you to all five destinations and many, many more! They range from 9 to 25 days long, so whether it’s a week-long mid-semester break or a month-long backpacking adventure you’re looking for, you’re guaranteed to find a trip suited to you. Check out our China tours here! 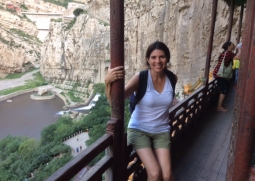 01201
Visiting the Ancient City of Datong

0845
My First Ever Sleeper Train Experience! 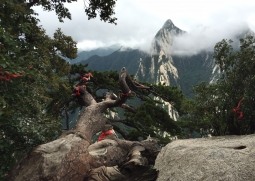